Sensory Play with Gelatine: The Importance of Touch

Some children don’t like the tactile sensation of “messiness”. They dislike slimy sensory play; the slimy feeling of paint on their hands. They don’t play in the dirt. They avoid puddles in the rain. When doing art and craft activities, they are very neat and do not get sticky glue all over their hands.

My children are the antithesis of all that. They adore slimy sensory play. Their craft experience is about feeling the glue and paint. Any outdoor excursion is incomplete if one’s hands does not gather up sticks, rocks, dirt or a combination of all three.

Gelatine warfare is made for children, who like my children thrive on slimy sensory play. 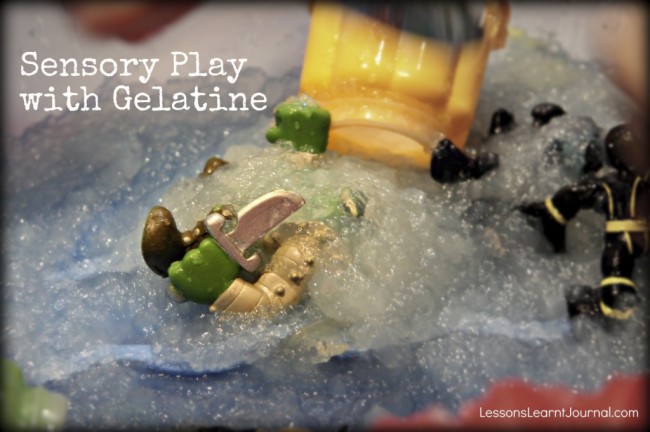 Inspired by TinkerLab’s Jell-O Excavation, I attempted to stage a dinosaur excavation of our own. Never one for using exact measurements, (which might explain why so many of my baking attempts fail), I mixed a sachet of gelatine with as much water as my silicon bundt cake pan would hold. I placed a few small toy dinosaurs in the mix, popped it in the fridge overnight and looked forward to the thrills of dinosaur excavation.

The next day, to free the gelatine concoction from the mould, I ran the back of the mould under a steady stream of hot water. SLURP. The gelatine concoction did not slide out whole as planned. Frustrated at the sticky mess, I was close to throwing the whole thing out. However, N & M were close by ready to excavate, and I thought the sticky mess would be an interesting sensory medium for them to play with.

I placed the ungraceful goop in an old baby bath, added large spoons and various containers. N & M added their own action figures and before I knew it N & M were staging their own gelatine warfare. 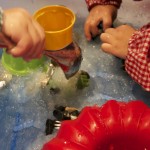 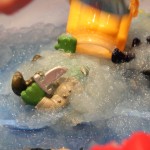 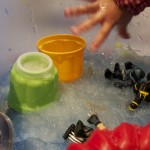 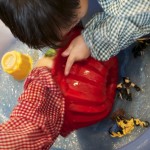 A brave commando slides through the middle of the bundt mould. 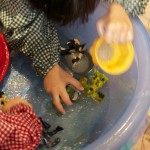 The team comes to help the fallen soldier.

No action figures were harmed. They’ve all been cleaned up and are ready for another day of duty. These guys scored a tough gig!

Reflecting on N&M’s sensory play experience with gelatine warfare, I became curious about the development and importance of a child’s sense of touch. How does a child’s experiences of touch impact their overall development, if at all? Is it an area that needs attention and support from parents and teachers, or does the sense of touch develop more in a laissez-faire manner?  I read Eliot, L 1999, ‘The importance of touch’, in What’s going on in there?, Bantam Books, New York and learnt the following lessons.

Big idea: A child’s early experiences at touching and being touched, through their infancy, toddler and preschool years are incredibly important for not only developing tactile sensitivity, motor skills and understanding the physical world but also for their overall health and emotional well-being. Eliot (1999, p.123).

Each child is a unique developing individual. Each has their own preferences in regards to tactile play. For some, gooey slime is the stuff of dreams. For others a clean, smooth canvas is more to their delight. Whatever their tactile disposition, as long as it forms part of a child’s enriched environment, it is helpful for their development. I am challenged to not dismiss or discourage a child’s tactile disposition because it may clash with my own disposition. I am convicted to be mindful of the words I use and the messages my body language and facial gestures may convey – (the shameful number of times I’ve wrinkled my nose or uttered, “Oh, what a mess!”).

As a primary school teacher, I am mindful of the child protection laws in place to protect children from predators. I note however Eliot’s point about the importance of touch to a child’s physical and psychological well being. Perhaps I need to be more generous with the number of “side by side” hugs I give my students. As a mother, I am determined to give my children as many hugs and kisses as they want from me. As for treating my children with a daily massage, I think I will start that routine, (and one day perhaps my children will realise that I too would show lower anxiety and stress levels, better mood, improved sleep patters and higher levels of attentiveness if treated to one daily).

See more of our messy play.
Check out these great blogs filled with sensory play:
Flights of Whimsy: Sensory Play with Recycled Plastic Off-Cuts!
Dirt and Boogers: The Importance of Sensory Play
Not Just Cute: A Handful of Fun